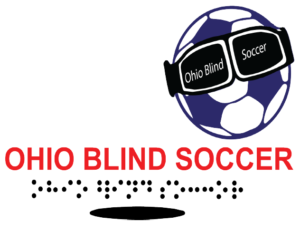 In collaboration with United States Association of Blind Athletes (USABA), Columbus Recreation Parks Department is proud to have one of the six American blind soccer teams. Both visually impaired and sighted individuals are welcome on the team! More information on the sport can be found below, as well as information on our practices, clinics and upcoming events.

Information on clinics and events is coming soon!

5-A-Side or Blind Soccer is for individuals with visual impairments. The match is played by two teams, each consisting of no more than five players, four of whom are completely blind (B1 Category) and one goalkeeper who may be fully sighted or partially sighted (B2 or B3 category). A Paralympic team is composed of a maximum of fifteen people who have the following functions: eight outfield players, two goalkeepers, two guides, one coach, one assistant coach and one doctor. Paralympic Sports A-z: Blind Soccer (Football Five-A-Side)

The athletes wear eyeshades to level the visual playing field. The game ball also contains ball bearings so athletes can hear the ball. The game is played on a turf field that is 40 by 20 meters. The field has sideboards/ kickboards along the length of the field. These sideboards help with the athlete’s orientation and create a safe, confined place for the athletes to play. There are three guides who assist with positioning and verbal cues throughout the field: The goalkeeper on the defensive third, the coach at midfield and an assistant coach or sighted guide behind the opponent’s goal on the offensive third. The athletes are constantly communicating on the field as well as the coaches and guides behind the goal. One adaptation on defense is that they have to say the word “VOY” which means “I am coming.” This alerts the athletes of who has the ball and when the defender is attacking. All other adaptations and rules can be found on IBSA Football Rules.